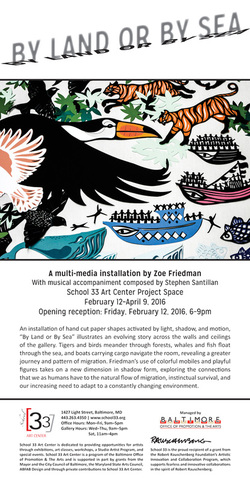 It's going to be a great show
Everything On it: Bmoreart and WTMD Studios present a new exhibit by Andrew Liang and Zoe Friedman 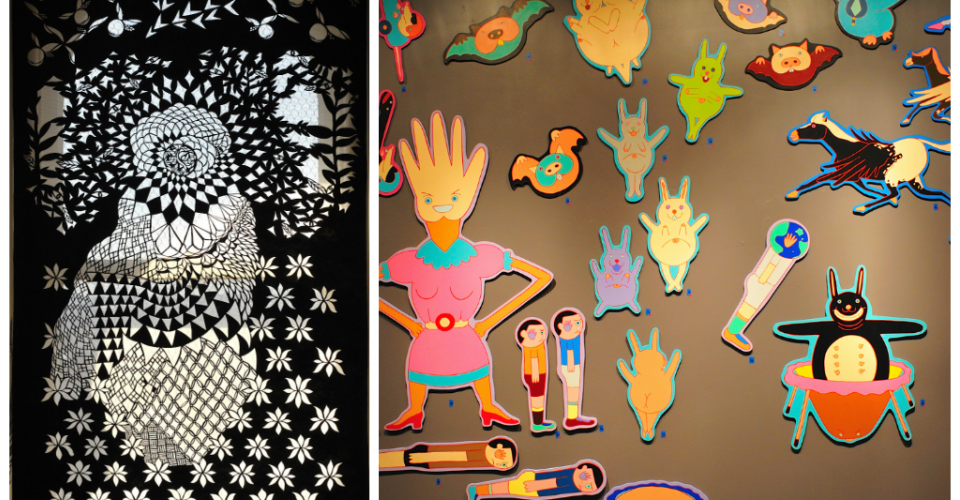 WTMD and Bmoreart present a new exhibit by Baltimore artists Andrew Liang and Zoe Friedman, with an opening reception and concert on Friday, March 28 from 7 – 10 pm.

Unlike many two-person shows, the two artists will work together to create a site-specific and immersive environment for viewers. “Everything On It” will transform the new WTMD studios into a vivid multimedia experience, with Liang’s elegant cartoon-style mural paintings and Friedman’s video projections.

“We’re thrilled to have two of the city’s most talented young artists take over our new home,” said Scott Mullins, WTMD’s program director. “It’s a chance to bring together experimental art and independent music — two things that Baltimore does very well.”

“Everything On It” will be on display March 24-April 30 at the WTMD studios, 1 Olympic Place in Towson. An opening reception featuring live performances by Americana duo Mountain Peaks and 11- piece avant-garde ensemble Ghost Life will be held 7 p.m.-10 p.m. Friday March 28.

In addition to three new videos, Friedman is creating a variety of hand-cut pieces.  According to the artist, “The videos are a mix of stop-motion animation and live footage.  The hand-cut pieces are made from paper, Tyvek and vinyl.  I have four large window hangings, each 3 ft by 6 ft, they are made to allow light to shine through the holes and also cast shadows onto the floor.  The vinyl cut outs will cover the windows and doors.”

Andrew Liang will exhibit two large installation pieces, as well as smaller paintings. In true Liang fashion, ”The Worm,” will consist of a mural with cut out wood paintings attached inside of it, and the concept is people “doing the worm (dance).”  The second large installation, “Blingbling,” will be also a mural on the wall, but will feature a soft sculpture portrait of the artist’s beloved pet feline, named Blingbling.

According to Ober, founding editor, “It’s the first exhibit for Bmoreart, and our goal is to feature great artists in a new setting and to present them to a broad audience. WTMD studios features regular concerts that are always packed and this seems like a great opportunity for artwork to be experienced by a smart and cultured audience.” WTMD will feature on-air interviews with both artists in preparation for the exhibit.

Liang is especially excited about the exhibit because it will give him a chance to revisit works installed in other cities, but never before in Baltimore. “I intend to have a lot of fun at the show myself,” says Liang. “I wish folks who come to the show would too, and watching people having fun, and having fun myself at the same time is always an unique experience!” In addition, Liang will be performing with Ghost Life during the event.

“This show is going to be fun!” says Friedman. “We want people to come out and listen to music and be in a bizarre and interesting environment.  I’m excited to work with a radio station and have music be a part of it.  Andrew’s art and my art are also really different, so it will be cool to see how it comes together.”

Now in its 10th year, 89.7 WTMD is a member-supported AAA station and NPR affiliate from Towson University. Since moving into its new facility last year, WTMD has expanded its programming to offer free weekly concerts by nationally touring bands, as well as art exhibits and specialty shows such as Baltimore Hit Parade Live and the 24-hour Rock ‘n’ Roll-a-Thon.


You can read more here and listen to a radio interview..hahaha